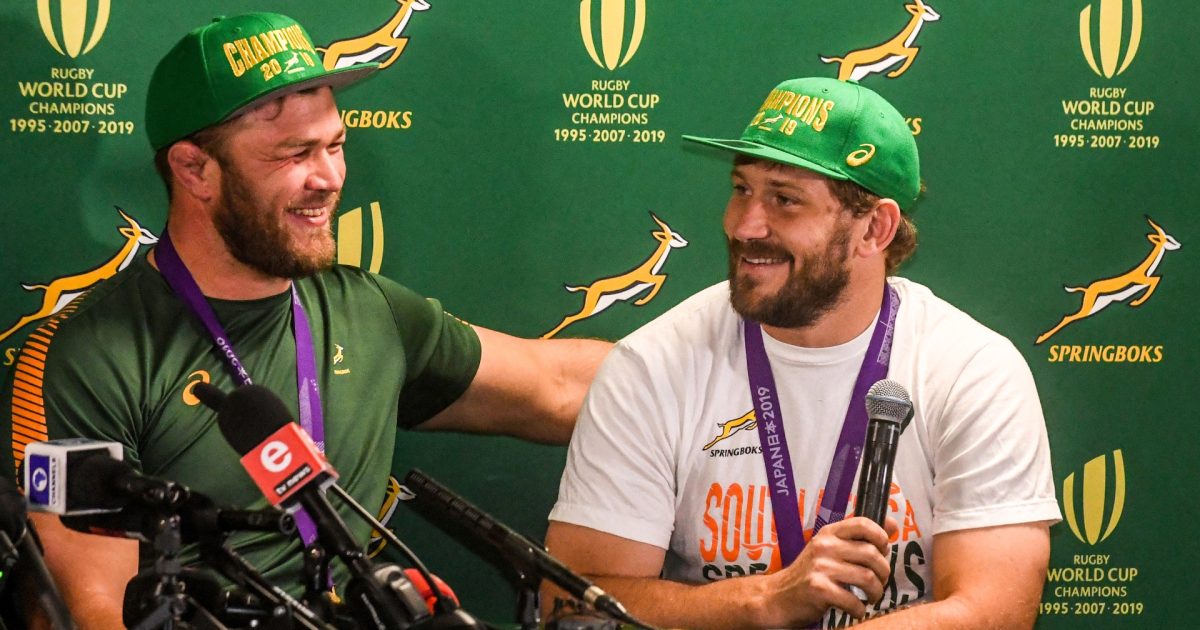 Springboks boss Jacques Nienaber has after all defined why injured Springboks Cobus Reinach and Johan Goosen have stayed with the nationwide workforce in Pretoria whilst injured duo Frans Steyn and Duane Vermeulen weren’t integrated. Nienaber named a 43-strong Springboks squad closing Saturday for the impending Test season that starts with the consult with by way of Wales for a three-game sequence.

With the pinnacle trainer no longer doing media to accompany his weekend announcement, a lot hypothesis used to be generated since then and it used to be handiest Tuesday afternoon when some readability used to be after all given at the complicated state of affairs.

Vermeulen, the long-time Springboks No8 who performed 80 mins for Ulster in Cape Town on Saturday, and the similarly seasoned Steyn have been the 2 notable squad omissions later that night and Nienaber has now spoken concerning the knee operation that the again row will go through this week and the way his dialog went with the software again who picked up an harm taking part in Currie Cup just lately.

In distinction with that pair’s Springboks squad exclusion, even though, Bulls out-half Goosen has stayed with the squad regardless of his harm as has Reinach, who wasn’t named within the 43 however remains to be with them at camp in Pretoria. “Let’s start with Johan Goosen,” mentioned Nienaber, addressing the theory that has ignited because the weekend about injured gamers who’re within the Springboks squad and those that aren’t.

“He got an injury a while back and he is someone we are looking to cover as a fly-half but he is a guy we have never worked with before. We just thought it was a great opportunity seeing as our camp is in Pretoria that we get him in, to put him into the alignments camps and now in camp so that he can see how we operate, how we work, how information gets distributed.

“That was the thinking about including Johan for these three weeks but when we move on from here and go into the Test matches in Bloemfontein and Cape Town and playing against New Zealand, he will stay with the Bulls and finish his rehab with them and then start the URC next season playing a couple of games with them. If everything goes well and his performance is good, he can join us on the end-of-year tour.

“Duane and Frans got injured while playing for their clubs (Ulster and the Cheetahs respectively),” persisted Nienaber, switching to the Springboks state of affairs relating to Vermeulen and Steyn. “Duane will go for a procedure and Frans has done a hamstring, so he is under rehabilitation with his club.

“We had a good conversation with Frans. He is a player that we will probably pull into the squad during this year but we had an open conversion between us, ‘Do your rehab, make sure that you are 100 per cent right, make sure you are in good physical conditioning and if pick up an injury we will pull you into the squad ASAP’.

“It finished, ‘Don’t be hasty with your injury’. He understood how we see the plan going forward with him and he understands how we think. The moment Frans is ready to go, good to go and is medically fit and there is an opportunity for us to pull him in, we will.

“Duane is going for a procedure this week and has got clearance from his club to do his rehabilitation in South Africa. He will go through the procedure, through the rehab and once he is cleared by his club we can pull him into our squad.

“Then the other one is Cobus. He had an injury a while back, he came for an operation in South Africa and he asked the club [MOntpellier] if it was fine he does his rehab here in South Africa. They agreed to do that so he is currently doing his rehab in South Africa but the same as with Duane, he needs to get clearance from his club after his rehab is completed, he has to fly back to Montpellier, their medical doctors have to check him out and once they clear him we can pull him into our environment.

“That is a mouthful but I’m pleased there is now clarity in terms of why certain injured guys are with us. The short answer is their clubs gave permission for them to do that and they are doing their rehab in South Africa and then some of the guys that got injured now in the last part of the season are still with their clubs and haven’t had any procedures done on them so they need to go through the whole process and once the club then releases them medically we can pull them into our squad.

“And Frans Steyn, we had a nice conversation, he knows where he stands with us and like I say, he has got to do his rehab and once we need him we will just pull him up if he is in good shape and keeps himself fit,” concluded the Springboks boss.

Join unfastened and let us know what you in point of fact suppose!